These are some of the people I've profiled over the years. They include a former grand wizard of the KKK, a pedophile after prison, an aging hobo, a scientist bent on curing pets' boredom, and a chain-smoking microbiologist who created the world's most deadly strain of anthrax.

A Survivor in Limbo

The medical staff at Spaulding Hospital Cambridge has healed the wounds of Zilania Joacin, fed and clothed her, helped her in and out of bed nearly every day since she arrived with little more than a hospital johnny.
Now, some in tears, they gather in the cramped room the wizened woman shares with another patient. They have come to say goodbye.
Joacin arrived in Boston four years ago, battered by the earthquake that ravaged Haiti in 2010. For nearly all that time, home has been the second floor of the rehabilitation hospital. The 71-year-old has been here longer than any other patient, and, by all accounts, she is the last evacuee of the quake remaining in a Boston-area hospital. 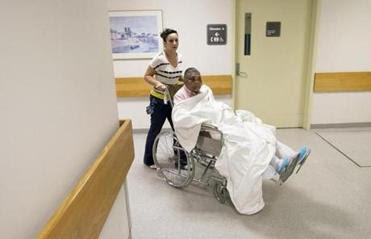 
Haiti survivor lives at hospital since 2010
The doctors and nurses have done their best to salve the pain of a broken hip and several strokes. Joacin is stable now and although she needs round-the-clock care, it can be provided by a home health aide or at a residential facility. Administrators say it no longer makes sense for her to remain in a high-demand bed that costs about $1,000 a day, an expense absorbed by Spaulding.
It’s time for her to go, they insist, especially now that a hospital in Haiti is ready to provide her free care. She has no way to pay for the steep cost of care in the United States, no access to government health plans or private insurance, no well-off relatives.
Three days before Joacin is scheduled to leave, the staff has come together during a shift change. They shower her with hugs, pictures, and presents: toiletries and medication, shoes and clothing, and two new suitcases, necessities that may not be easy to come by back home.
Joacin, illiterate and suffering from dementia, does not understand the purpose of the party, she says later.
Neither she nor her relatives — who deeply appreciate the top-flight care she has received — are ready for her to leave, especially to go back to Haiti.
“If I go there, I’m going to die,” she says a few days after the party, seated in her wheelchair. “I’ll die alone.”
Her husband of 50 years, Reserve Coffy, who has been taken in by a Haitian family in Cambridge and spends several hours each day visiting his wife, wants her to stay at Spaulding as long as she can. He fears what will become of their lives if they return home.
“If we go to Haiti, we’ll die and die,” says Coffy, 72, sitting beside his wife. “If we stay here, we’ll live and live.”
* * * * *
Jean Paul Coffy was living in Chicago with his wife and two children when he learned about the earthquake. He tried frantically to reach his parents and other relatives, but there was no getting through.
So the musician pulled together $1,500 from his savings and a donation from a friend, gathered water purification tablets and cereal bars, and flew to Haiti.
There, he grasped a candle as he made his way into the remains of his family’s concrete-and-tin home in Port-au-Prince.
It was six days after the catastrophe, which left 100,000 to 300,000 people dead. Major aftershocks still rattled the country.
He found his parents huddled in an intact back room, surviving on nothing more than crackers. His mother, a diabetic who had previously undergone a hip operation, had a broken leg, which had turned dangerously swollen and infected. His father had minor injuries. A brother and a sister were dead. Another brother had disappeared.
His mother needed help, desperately.
The son hired jitneys, buses, and taxis to take his parents on perilous journeys over rutted roads. First, they went to the Dominican Republic, and then back to Haiti. Over two months, he spent thousands of dollars on medical care, government documents, housing, food. He started a blog and raised thousands of dollars.
Their odyssey ultimately took them to a hospital in Cange, Haiti, run by Partners In Health, a Boston-based charity that provides free health services to impoverished people around the world. Doctors there assessed Joacin’s condition and determined she was unlikely to survive if she did not get to a hospital in the United States.
That was when her luck changed. At the same time Joacin was in Cange, so were some of the most powerful people from Boston’s medical firmament: Dr. Elizabeth Nabel, president of Brigham and Women’s Hospital, and Dr. Gary Gottlieb, president of Partners HealthCare, which owns Brigham and Women’s and Spaulding.
They promised to provide Joacin free care in Massachusetts.
Within a few days, she became one of fewer than 100 earthquake victims flown to the United States with the help of Partners In Health, which arranged for her medical visa, a helicopter ride from the hospital to the airport in Port-au-Prince, and a special medical evacuation plane to Boston.
When the couple arrived at the Brigham in late March 2010, Joacin underwent a battery of care that included an expensive hip replacement. Within a month, medical officials transferred her to Spaulding in Cambridge.
“This has been the hardest experience of my life,” Jean Paul Coffy told a physician who accompanied the family to Boston, according to a Partners In Health blog that the charity uses to raise money. “But now I feel like I won the lottery.”
* * * * *
After several months, Joacin’s infection heals, and her other ailments are brought under control. The staff at Spaulding begins searching for discharge options, maintaining that Joacin no longer belongs in a hospital.
It is costing the hospital a lot of money to provide her care. By the beginning of this year, administrators say, they have spent nearly $2 million on her treatment.
“The question is where our responsibility ends,” says Joanne Fucile, vice president of operations and director of nursing for Spaulding Hospital Cambridge, who notes the average length of stay for a patient is less than a month. “I don’t know the answer to that.” 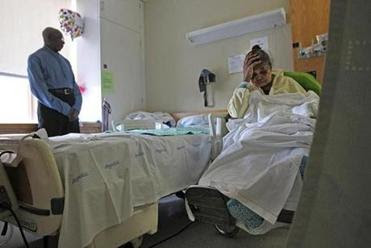