These are some of the people I've profiled over the years. They include a former grand wizard of the KKK, a pedophile after prison, an aging hobo, a scientist bent on curing pets' boredom, and a chain-smoking microbiologist who created the world's most deadly strain of anthrax. 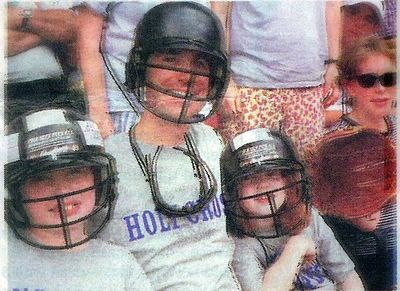 WALTHAM -- If Henry "Kip" LaShoto were a superhero, he might be called Safety Man.

In May, he was watching his 9-year-old son warm up at a Little League game when a foul ball slammed into the boy's gut, leaving a large welt and a raw memory. A few weeks later, his son was at second base when a grounder took a bad hop, smacked the boy under the right eye, and left a trail of blood on his uniform.

Since his son's injury, LaShoto has set out on a one-man crusade to enhance safety on and off the field, everywhere from Little League games to the PGA Golf Tour.

"When a baseball traveling at about 120 miles per hour strikes the face of a baby, child, or adult, it can cause fractures of the temple, sinuses, jaw, nasal septum, and bony globe that surrounds the eye," he said. "If someone is struck in the wrong place, it could be fatal."

In the past month, the 42-year-old chiropractor has spent hours on the phone with doctors, coaches, and sports teams in Japan. He has sent a deluge of letters to public officials and sports organizations.

In the interest of safety, he's asking for 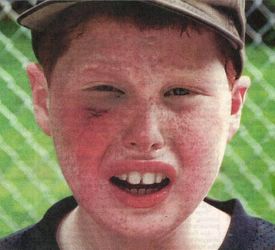 "Am I little crazy? Well, yeah," LaShoto said while showing pictures of his son's bruises. "But look, my son almost went blind. Wouldn't you want to do the same to protect your kids?"

The idea of armored Little Leaguers may sound extreme, but LaShoto is not alone in worrying that a baseball can cause serious injury, and not just to players.

Only a few months ago, a 58-year-old man at an NHL game between the Phoenix Coyotes and the San Jose Sharks was blinded in the right eye when an errant puck went into the 11th row and smashed into his face. A similar injury befell a 41-year-old woman sitting in the stands at last year's College World Series. And a 29-year-old man sued the Mets a few years ago after a player's bat hit him in the stands.

Outside the United States, officials have begun to take note. Safety netting is standard at hockey games in Europe and increasingly at baseball games in Japan. In February, after a 21-year-old man died when a puck hit him in the temple at a hockey game in Manitoba, officials from amateur sports teams throughout Canada met to consider installing netting at community hockey rinks.

In the United States, however, fans have had little success in persuading the major franchises to add protective barriers. Over the years, teams have taken some safety measures, such as the netting behind home plate at baseball stadiums, and the clear barriers that surround hockey rinks. But they have stopped short of the total protection that LaShoto wants, instead warning fans with messages on scoreboards, over the PA system, and on notes on the back of tickets.

"Fans don't want obstructed views. They want to be in on the action," said Kevin Hallinan, senior vice president of security and facility management for Major League Baseball. "One of the greatest thrills of going to the park is catching a foul ball."

Teams also say that netting and other protections could interfere with TV cameras shooting the action. "How would you add the netting anyway?" said Frank Brown, vice president of media relations for the NHL. "Do you run it all the way to the top of the roof? Although it may sound crass, the incidence of people being struck, injured, or disabled is very low."

Neither the NHL nor Major League Baseball teams keep data on injured spectators.

As for legal action, injured spectators pushing for new safety measures have had little luck in court. For years, US courts have ruled that spectators at baseball games and other contests assume a risk of being hit by what a Georgia court in 1949 called "foul balls, flying bats, and other like missiles."

Some observers of US sports believe that concerted effort and a good public relations campaign may ultimately sway some teams to take action.

"The analogy of the bicycle helmet is a good one: No one used to wear bicycle helmets when I was a kid," said Richard Lapchick, director of Northeastern University's Center for the Study of Sport in Society. "All it takes is one individual to start something, no matter how farfetched it may seem at the time. Unfortunately, it's probably going to take a dramatic incident of someone getting hurt for something to be done."

That's exactly what Kip LaShoto says he's trying to avoid. After a foul ball hit Yankees coach Don Zimmer in the dugout two years ago, the Yankees and some other teams began putting up the same protective netting in front of their dugouts that LaShoto says should be erected to protect fans.

"It's total hypocrisy," he said. "Is it that they want to protect the players but not the fans?"

Many people think LaShoto has gone off the deep end. The chiropractor says he is designing a special Kevlar outfit for his son. He requires both his son and daughter to wear special caged helmets when they go to Red Sox games. His views about safety have become so strident that he has been kicked off the field at Little League games because some say he was scaring the players.

"He is definitely obsessed," said Tony Romano, who coaches James's baseball team, the Orioles. "He takes things way too seriously, and he treats the kids like they're playing for the Red Sox."

For Frank Deford, a sports commentator and senior writer at Sports Illustrated, safety issues should be taken only so far in professional sports.

"Life is not risk free; it's not a perfect world," he said. "The pleasure that comes from being close to a game, for millions of people, far outweighs the occasional risk that's bound to happen. But weird things happen."

Pushing his son to put on his baseball uniform while the boy was at camp one recent afternoon, LaShoto pointed to James's shatterproof glasses, his dentist-fitted mouthpiece, special sun-blocking undershirt, and the piece of equipment the boy is teased for the most: his athletic supporter.

"We're designing a special vest that would go from his larynx down to his coccyx," he said, pulling James's shirt up to show where it would go. "Only then will the kids really be safe."
David Abel can be reached at dabel@globe.com.  Follow him on Twitter @davabel.